Aerial view of Soda Lake, a shallow, ephemeral, alkali lake, in the Carrizo Plain in southeastern San Luis Obispo County, California. Internal drainage of the Carrizo Plain and the formation of Soda Lake began during Pliocene-Pleistocene time when tectonic deformation associated with the San Andreas Fault defeated a stream that once drained the valley. An originally fresh to brackish water lake probably persisted through much of the Pleistocene during which coastal California was wetter and cooler than now. Diminished Holocene precipitation and a higher evaporation rate led to shrinkage of the ancestral lake and associated increased salinity which set the stage for clay dune formation (wiki 2009) 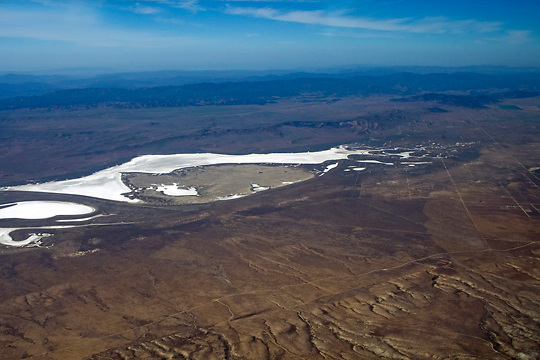